When working as system administrator in Linux, might need to forcefully disconnect user from SSH connection. One of the reasons to do that is when suspicious user is detected which acting maliciously. This tutorial demonstrates how to force user to disconnect from SSH connection in Linux.

In Linux, the killall command can be used to kill processes. The -u option allows to kill only processes the specified user owns. For example, the following command allows to disconnect user john from SSH connection by killing all processes owned by that user:

Combine Multiple Files Into One in Linux
Linux provides commands that allows to perform various operations on files. Sometimes we may need... 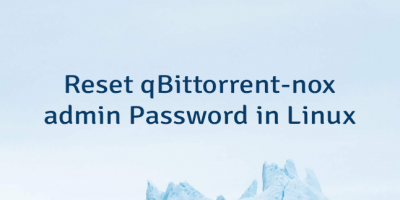 Install qBittorrent Inside Docker Container in Linux
qBittorrent is a BitTorrent client for downloading files. It is an open-source project released under...